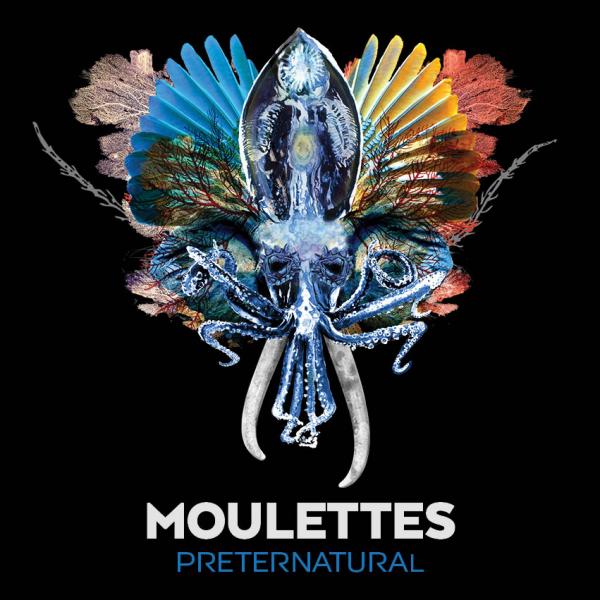 Moulettes are a Brighton based British band of Björk, Frank Zappa and Gentle Giant loving multi-instrumentalists that weave in and out of several genres with 3 part harmony female vocals, amplified Cello, distorted Bassoon, Auto-Harp, Guitar, Drums, Bass and Synths into an incomparable alt.pop/rock/folk universe. Since the success of ‘Constellations’ (No.7 Indie Charts, Spiral Earth Best Album 2014), Bajian Irish Londoner Raevennan Husbandes has joined the band on Vocals and Electric Guitar. With this new line-up the band have made their fourth Album ‘Preternatural.’

From Medieval Latin preternaturalis (mid-13c.), from Latin phrase praeter naturam (praeterque fatum) “beyond nature (and beyond fate).” In contrast to the supernatural, the dominion of deities, preternatural phenomena are... “suspended between the mundane and the miraculous in a domain of Wonder & Marvel. Strange specimens evoke questions about the natural order...they provoke the spirit of investigation. ” ‘Preternatural’ is a word particularly subject to etymological metamorphosis, describing the phenomena that fall “between the known and the unknowable” ...“recognising that the areas of magic, religion, and science are fluid and that their intersections should continue to be explored, contextualised, and challenged.”

In the spirit of this mindset, we set out to make a record about the phenomenal creatures that inhabit the earth, demonstrating creativity, industriousness & knowledge; capable of generating electricity, continually defying accepted scientific ‘truths’ and redefining perimeters. Inspired by their ability to challenge our expectations we imagined an idiosyncratic song for each creature through the writing and production of this record, looking for new ground to explore sonically between the dichotomies of Nature & Technology, D.I.Y & Industry, Acoustic and Electronic.

It features spiders who pluck harmonics on the strands of their webs to test the tension; Pufferfish who trace concentric mandala patterns in the sand to attract a mate; the phenomenon of the mind control parasite and the enigmatic ‘Immortal’ Jellyfish. The symbiotic underwater jungle of the coral reef & the bioluminescent light show of the Octopus; the mystery ‘bloop’ sound recorded in the pacific; the visual patterns that run through the natural world and the chaos that is its turbulent accomplice. From the Barnacle Goslings of Greenland, who at two days old leap off a 400 foot cliff, to the claustrophobic underground existence of the Halicephalobus Mephisto Nematode Worm, whose discovery re-defined the perimeters of life, the theatre, thrill and artistry of nature is undeniable."

The aim of this record is to explore and celebrate the often surreal and miraculous wealth of fascinating diversity that exists in the natural world, and examine our relationship to it as humans: our similarities, our differences and our role as caretaker or threat. To hold in tension the emotional world and the scientific. To acknowledge that the natural world still keeps many secrets, and to hope that consideration and scientific enquiry will help the human race in our struggle to protect the wild beauty of the only planet we have."